Description: How idolatry crept into Christianity.  Part 2: Introduction of pictures and sculptures in the Church and the beginning of image-worship. 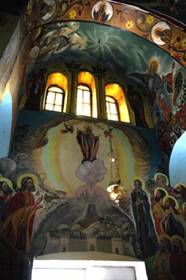 It is worth noting that these Malabar Coast Christians were neither incorrect nor alone in their views:

The primitive Christians were possessed with an unconquerable repugnance to the use and abuse of images, and this aversion may be ascribed to their descent from the Jews, and their enmity to the Greeks.  The Mosaic law had severely proscribed all representations of the Deity; and that precept was firmly established in the principles and practice of the chosen people.  The wit of the Christian apologists was pointed against the foolish idolaters, who bowed before the workmanship of their own hands, the images of brass and marble, which, had they been endowed with sense and motion, should have started rather from the pedestal to adore the creative powers of the artist.[1]

Or, to put it in simpler and more modern English,

The primitive Christians had attacked image worship as the work of the devil and there had been wholesale destruction of every type of idol when Christianity had at last triumphed.  But over the succeeding centuries, the images crept back, appearing under new names but, to the critical eye, with an identical role.  It was the Christians of the East who first began to feel that much of the pagan religion that their forefathers had destroyed, at such cost in martyrs’ blood, was insensibly being restored.[2]

Religious art nonetheless was approved at the Council of Nicaea in 325 CE, and idol worship invaded Catholic services from that time on.  Gibbon comments:

At first the experiment was made with caution and scruple; and the venerable pictures were discreetly allowed to instruct the ignorant, to awaken the cold, and to gratify the prejudices of the heathen proselytes.  By a slow though inevitable progression, the honours of the original were transferred to the copy; the devout Christian prayed before the image of a saint; and the pagan rites of genuflexion, luminaries, and incense, again stole into the Catholic Church.[3]

The worship of images had stolen into the church by insensible degrees, and each petty step was pleasing to the superstitious mind, as productive of comfort and innocent of sin.  But in the beginning of the eighth century, in the full magnitude of the abuse, the more timorous Greeks were awakened by an apprehension, that, under the mask of Christianity, they had restored the religion of their fathers; they heard, with grief and impatience, the name of idolaters; the incessant charge of the Jews and Mahometans, who derived from the law and the Koran an immortal hatred to graven images and all relative worship.[4]

All whose Christianity was based upon scripture, apostolic example, and the teachings of the prophets opposed the introduction of idol worship.  Hence, when Emperor Constantine’s congruently named sister, Constantina, requested a representation of Jesus Christ in 326 CE, Eusebius of Nicomedia answered haughtily, “What, and what kind of likeness of Christ is there? Such images are forbidden by the second commandment.”[5]

Over two centuries ago, Joseph Priestley penned a summary that not only explained the history, but also the reason for this corruption of Christian orthodoxy:

Temples being now built in honour of particular saints, and especially the martyrs, it was natural to ornament them with paintings and sculptures representing the great exploits of such saints and martyrs; and this was a circumstance that made the Christian churches still more like the heathen temples, which were also adorned with statues and pictures; and this also would tend to draw the ignorant multitude to the new worship, making the transition the easier.

Paulinus, a convert from paganism, a person of senatorial rank, celebrated for his parts and learning, and who died afterwards bishop of Nola in Italy, distinguished himself in this way.  He rebuilt, in a splendid manner, his own episcopal church, dedicated to Felix the martyr, and in the porticoes of it, he had painted the miracles of Moses and of Christ, together with the acts of Felix and of other martyrs, whose relics were deposited in it.  This, he says, was done with a design to draw the rude multitude, habituated to the profane rites of paganism, to a knowledge and good opinion of the Christian doctrine, by learning from those pictures what they were not capable of learning from books, of the lives and acts of Christian saints.

The custom of having pictures in churches being once begun (which was about the end of the fourth or the beginning of the fifth century, and generally by converts from paganism) the more wealthy among the Christians seem to have vied with each other, who should build and ornament their churches in the most expensive manner, and nothing perhaps contributed more to it than the example of this Paulinus.

It appears from Chrysostom, that pictures and images were to be seen in the principal churches of his time, but this was in the East.  In Italy, they were but rare in the beginning of the fifth century, and the bishop of that country, who had got his church painted, thought proper to make an apology for it, by saying that the people being amused with the pictures would have less time for regaling themselves.  The origin of this custom was probably in Cappadocia, where Gregory Nyssenus was bishop, the same who commended Gregory Thaumaturgus for contriving to make the Christian festivals resemble the pagan ones.

Though many churches in this age were adorned with the images of saints and martyrs, there do not appear to have been many of Christ.  These are said to have been introduced by the Cappodocians; and the first of these were only symbolical ones, being made in the form of a lamb.  One of this kind Epiphanius found in the year 389, and he was so provoked at it, that he tore it.  It was not till the Council of Constantinople, called In Trullo, held as late as the year 707 CE, that pictures of Christ were ordered to be drawn in the form of men.[6]

Thnx for this very concise and enlightening article. powerful message