Description: How idolatry crept into Christianity.  Part 1: The meaning of ‘worship’.

It is a strange irony that those who reverence stones live in glass ideologies. 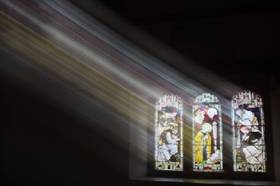 Idolatry—every monotheist abhors the thought, and yet many commit the crime themselves.  Few today fully grasp the complexities of this issue, for the definition of idolatry has been buried beneath nearly 1,700 years of church tradition.

The commandment not to make carved images speaks for itself, as does the subsequent decree not to make any likeness whatsoever.

These directives could not be clearer.

It is man’s nature, however, to seek loopholes in laws, taxes, and scripture.  Consequently, there are those who consider the initial order not to make “carved images” or “any likeness of anything” conditional upon the following decree not to serve or worship the images—the argument being that if nobody actually worships the image itself, then it’s permissible to make it.  But that’s not what the commandment says.  And in any case, caution dictates avoiding what God has forbidden, for the one who trespasses can expect to be held accountable.

But let’s take a step backward.  What do the words serve and worship really mean?

The verb to serve, according to Merriam-Webster’s Dictionary, means “to give the service and respect due to (a superior).”[1]  So, if placing images in exalted positions (statues of saints literally placed upon pedestals, religious icons framed, etc.), spending time, energy and money to dust, clean, beautify, and preserve them are not acts of service and respect, what are?

The typical Christian response?  That these acts of service are not acts of worship.

Now, wait a minute.  The word worship wasn’t even around two thousand years ago.  In fact, it wasn’t around one thousand years ago.  It didn’t exist in the English language during the period of revelation, even if the New Testament had been written in English, which it wasn’t.  So what words were available in biblical times?  What is the meaning from which the word worship was derived?

Not surprisingly, we trace the word worship back to a sense of having worth: a sense of worthiness:

Worship began life as a compound noun meaning virtually “worthiness.” It was formed from the adjective worth and the noun suffix -ship ”state, condition,” and at first was used for “distinction, credit, dignity.” This soon passed into “respect, reverence,” but it was not used in specifically religious contexts until the 13th century.  The verb dates from the 12th century.[2]

And this from the New Catholic Encyclopedia:

Worship: In Anglo-Saxon, “weorð-scipe” meant “worth-ship,” in which “worth” is to be understood in the sense of value or honor.  Worship, therefore, originally meant the state of worth, the quality of being valuable or worthy.[3]

So what does the second commandment really say?  Not only should one not bow or pray to man-made images (in the manner of many Catholics), but one should not even value these images.

“But we don’t value them!” the average Christian responds.

Oh, really?  Well, in that case, you won’t mind if we just toss them into the garbage or flush them down the toilet.  I mean, they’re worthless, right?  Without value, right?  And what do we do with worthless things?  We throw them away, don’t we?

The point is that, yes, Christians value their images, and in this manner they violate the second commandment.

Does idolatry manifest itself in other ways?

Sure.  Ever wonder why people used to (and in some cases, still do) greet upper-tier clergy, royalty, and members of the social elite as “Your worship?” By this phrase, commoners venerate men and women of high worth, position, and social status.  So is that worship?  According to the definition of the word, yes.  “Your worship” meant “Your worthiness,” and conveyed the distinction of high value.

So does this mean the commoners who used this phrase worshipped those they addressed in such a manner?  Uh, yes.  Yup, that’s about it.  Not only did they worship them, they idolized them, and we see this dynamic applied as much to music, sports, and movie stars in the present day as we do to clergy, royalty, and the social elite.

“Oh, come on,” you might say, “You’re being ridiculous.” No, I’m being precise.  I’m not saying God has forbidden us to honor such individuals; I’m just saying that, yes, addressing individuals in such terms as “Your worship” is a form of worship.  However, where this crosses the line into the forbidden zone is when people revere others as gods, or grant them the honor and respect reserved for our Creator.  Should they prefer these individuals’ guidance to the laws and guidance of revelation, they usurp God’s authority.  Likewise, should they revere such an individual by, oh let’s say, claiming him to be infallible or by bowing down to him (even if just to kiss his ring), they grant him the rights and special honor reserved for Almighty God.

In this manner, idolatry does not require a statue, although statues certainly heighten the offense.  After all, “idolatry refers to the worship of gods other than the one, true God, and the use of images is characteristic of the life of the heathen.”[4]

It is interesting to have a Catholic encyclopedia provide such a definition, isn’t it?  Why, we don’t even need to read between the lines to realize it is self- condemning!

Unfortunately, many modern Christian denominations justify their practices more on the basis of tradition than scripture.  Rarely is scripture given priority over tradition.  Examples do exist, however.  As recently as the 1500s, the Nestorian Christians of the Malabar Coast in India were presented with an image of the Virgin Mary for the first time.  Largely sheltered from European influence, these Malabar Coast Christians had remained ignorant of the changes instituted by the various councils and synods of the European churches.  Only with the establishment of sea routes in the sixteenth century did the two begin to interact.  As Edward Gibbon noted,

Their separation from the Western world had left them in ignorance of the improvements or corruptions of a thousand years; and their conformity with the faith and practice of the fifth century, would equally disappoint the prejudices of a Papist or a Protestant.[5]  So how did they respond when presented with an image of the Virgin Mary?

The title of Mother of God was offensive to their ear, and they measured with scrupulous avarice the honours of the Virgin Mary, whom the superstition of the Latins had almost exalted to the rank of a goddess.  When her image was first presented to the disciples of St. Thomas, they indignantly exclaimed, “We are Christians, not idolaters!”[6]