Ten Reasons to Get Excited about the Dead Sea Scrolls

Five Reasons to Get Excited about the Dead Sea Scrolls 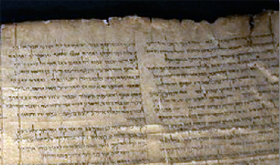 They’re old.  So what? Yeah, well, I understand.  Grandpa’s old, but the only one who’s excited about him is grandma, and even there, the magic wore off twenty years ago.  But the key is not the age of the Dead Sea Scrolls.  Rather, it’s the bloody, tumultuous period in which they were hidden away.  It was 68 CE, and Judea was in the middle of its revolt against Roman rule.  Emperor Nero, infamous for his persecution of the Christian/Jews in the wake of the great fire of Rome, assigned General Vespasian to sweep the Roman legions across Judea and wipe out Jewish insurgency.  Midway through this campaign, Nero was deposed and committed suicide.  With the Roman Empire in upheaval and the Jews of Judea waging civil war as well as combating the Roman onslaught, the keepers of the scrolls hid their treasured scriptures in the caves at Qumran (the area of the Dead Sea where they were found).

2)   They’re incomplete.  Even the best preserved scrolls have holes in them and are missing sections of text.  The library of Dead Sea Scrolls looks like an unfinished jigsaw puzzle.  Who knows what essential information is missing? Nonetheless, the texts we have hint at mind-boggling religious concepts.

3)   There may be undiscovered scrolls still hiding out in the Holy Land.  Scholars estimate as many as twenty of the caves at Qumran were lost, together with their contents, due to collapse.  Being collapsed, these caves cannot be found unless excavated by accident.  Caches of scrolls may exist elsewhere in the Holy Land, as well.  However, Israel’s stranglehold on this flow of information has resulted in scholars leveling charges of academic and/or religious conspiracy.

4)   Major interest groups don’t want you to know about them.  But let’s face it: If someone tells you not to look at something, isn’t that the first thing you want to do? Well, many interest groups don’t want you to look, or at least, not too deeply.  Visit the Dead Sea Scrolls exhibits, admire their preservation, appreciate their antiquity, but then move on to the Phoenician glass exhibit.  Do anything but delve into the scrolls’ history, their meaning.  Some scholars who have disclosed secrets contrary to the sanctioned “official version” have claimed the whistleblower punishment of academic persecution.  Are free-thinkers like Robert Eisenman and Michael Baigent quacks, as Israel’s religious authorities would like us to believe, or clear-minded scholars who sound the call of reason? Eisenman’s The Dead Sea Scrolls and the First Christians makes clear his lofty level of scholarship, while Baigent and Leigh’s The Dead Sea Scrolls Deception renders plausible the claim of a “conspiracy of consensus.” For several decades, scholars decried Israel’s delay in releasing the scrolls to the public; the work of these authors, among others, provides powerful evidence to support the theory of an academic scandal.  Why were Israel’s authorities so slow to release the Dead Sea Scrolls? If you believe the revisionist scholars, Judaic and Trinitarian Christian authorities have good reason to fear the secrets of the scrolls.

5)   The keepers of the scrolls were slaughtered after hiding them away in the caves.  In essence, they died to preserve the scrolls.  Sooo .  .  .  they must have held the scrolls with slightly more reverence than, say, the scriptural equivalent of comic books, right? So what was so precious about the Dead Sea Scrolls – not to us, but to their keepers? Was there a deep, dark secret they were willing to die for? Or were the scrolls just that holy? Either way, we should want to know.

Five More Reasons to Get Excited about the Dead Sea Scrolls

6)   Modern discoveries shed light on their importance.  The oldest and most authoritative New Testament manuscripts found to date, the Sinaiticus and Vaticanus codices (what’s a codex, plural: codices? A scriptural manuscript in book form, as opposed to scrolls), were discovered in the nineteenth century, long after the most popular version of the English Bible, the 1611 King James Version, was written.  These codices throw into question or, in some cases, frankly negate issues that were assumed by many to be religious certainties.  Given this new knowledge, biblical textual criticism is experiencing a resurgence of interest.  Many new facts have been exposed, some of which are of such importance as to be considered religiously revolutionary.  The Dead Sea Scrolls, like a critical piece of an unfinished jigsaw puzzle, helps to fill in our understanding of the Christian Bible.

7)   Modern biblical scholarship demands re-evaluation of the Old and New Testaments.  Scholars such as Bart D.  Ehrman and Bruce Metzger have exposed numerous errors and inconsistencies in both the Old and New Testaments.  Some of these errors are significant enough to challenge orthodox Jewish and Trinitarian Christian beliefs.  In the context of this scriptural and canonical uncertainty, every bit of evidence helps.  Again, the Dead Sea Scrolls help in this regard.

8)   The Dead Sea Scrolls excite the imagination.  They speak of a Teacher of Righteousness, believed by some scholars to refer to either Jesus or James.  They also speak of the Teacher of Righteousness’ antagonist, variously identified as the “Wicked Priest,” the “Man of Scoffing,” “The Man of the Lie,” “The Spouter of the Lie,” and “The Priest who Rebelled.” Some scholars believe these euphemisms refer to Paul, whom the scrolls describe as having been excommunicated from the early Christian church.  Now .  .  .  wait a minute.  If Paul was an enemy of Jesus or James, and was excommunicated from the early Christian church, what does that say about Trinitarian Christian canon, which is primarily based on the teachings of Paul?

9)   The Dead Sea Scrolls are fun! I mean, come on, those keepers of the scrolls? They were wild men! Talk about guys who really knew how to party, beginning of the first millennium-style.  Their sectarian scrolls describe their pure food and drink, daily ritual baths, and nighttimes spent studying scripture and praying.  If one of the “Sons of Light” so much as gestured with his left hand, he was punished, and anyone who even whispered against Mosaic law was exiled forever.  Giving up all worldly wealth, living a monastic life in the desert, this was a bunch of wool-robed, wild and crazy guys! But seriously, even if you don’t respect their convictions, you’ve simply got to respect their sincerity.  The keepers of the scrolls (believed by most scholars to have been Essene Jews) lived a tough life devoted to piety and worship.  So once again, what did they know about the scrolls that we don’t know?

10)  And finally, what is the main reason we should get excited about the Dead Sea Scrolls? The same reason the world’s great religious and political powers are excited about them! Nowhere in the Bible do we find the gospel of Jesus.  In fact, modern Christian scholarship acknowledges that all four of the New Testament gospels (Matthew, Mark, Luke and John) were written anonymously.  The religious world would love to find the true gospel of Jesus .  .  .  well .  .  .   maybe.  Perhaps I should say, the religious world would love to find the true gospel of Jesus, but only if it says what they want it to say.  If the true gospel of Jesus were ever found, consider the consequences.  A gospel that unequivocally proves Jesus’ prophethood would destroy Judaism and negate Israel’s political purpose of creating a Jewish state.  If Jesus teaches the monotheism of Unitarian Christianity rather than the Trinitarian mysteries derived from Paul’s teachings, it would tear down the canon of the Roman Catholic Church, as well as that of all other Trinitarian denominations.  At the same time, it would challenge the faith (and political support) of all so-called Christian nations.  We’re talking major upheaval of the world’s religions and religion-based superpowers.  Consequently, if the gospel of Jesus were ever found, these world powers would fight to possess it or kill to suppress it, depending on what it contains.  Now that is definitely worth getting excited about.

About the author:
Laurence B. Brown, MD, has authored several articles and books and his official website is www.leveltruth.com where he can also be contacted through the ‘Contact’ page.