Description: Transcribed from a sermon delivered by Muhammad Alshareef at the American University in Washington DC which was attended by Muslims and non-Muslims.  Part 1: The struggle early Muslims went through in rejecting false deities and worshipping the One true God. 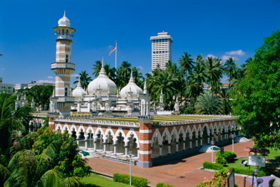 At the time of Prophet Muhammad – may God praise him-  there was a powerful and influential tribal leader by the name of Musaylamah.  For those who know his history, I challenge you to tell me who his father was.  Ask anyone in the world and they will say, "Al kadhdhab – the liar!" Even if we were to search out his descendants in the present day and ask them who was your ancestor Musaylimah’s father, they would say, "The liar!"  Why?

Musaylimah had all the earthly ingredients to launch a new religion.  He had exquisite knowledge of the language, was a magical public speaker, had wealth beyond imagination, and a tribal army crazy about him, ready to die for his safety.  He took all these ingredients and proclaimed to all that he was a Prophet of God just like Muhammad.

He missed one ingredient though, that sunk his ship – the ingredient of truthfulness.  That is why today, over 1400 years later, there is not a single human soul on earth who thinks Musaylamah was the Prophet of God.  Alas, God did not give him the authority to make this claim.

On the other hand, not a second ticks by in 24 hours, 7 days a week, except that there is a Muslim caller to prayer somewhere in the world in the millions of mosques announcing Ash-hadu anna Muhammadan Rasul-Allah – I testify that Muhammad is the Messenger of God.

This is so because human beings did not give him this authority, nor did he himself proclaim this to himself.  As the emperor of Rome, Heracles, asked the Muslim messenger in the year 679 after he had presented Islam to him, "Which King gave [Muhammad] this authority?" The reply was so simple, so profound, "God did! God gave [him] this authority!"

I grew up in central Canada, in a city called Winnipeg; a city so synonymous with the term cold that local folk call it "Winterpeg".  It’s so cold that people in Canada say, "Man, you’re from Winnipeg, isn’t it cold there?"

I went to grade school in Winnipeg in the early 80’s.  My family and I lived in an environment where we would be giggled at and insulted at the mall and by passing cars.  Not uncommon were random shouts of, "Hey Ninja lady!" or "Look what came out of the Desert!"

At that time, we were the only colored children in the school.  I remember once telling a friend to guess what the most popular name in the world was.  When I told him it was Muhammad, he told me, "Get lost! You’re the only one in the school with that name.  It must be John or something."

I don’t blame him; a lot of people in North America have not travelled and experienced the treasures of culture and flavour that the nations of the world have to offer humanity.

Reverend Billy Graham once said something so profound.  He said, "I travelled the world and came to the realization that perhaps America does not have in its palm all the truths of the world."

Reverend Billy Graham deserves a standing ovation for a statement like that and the modesty to announce that to millions of viewers.  But although America may not have all the truths, it is blessed with a nation of truth seekers, for it is never a shame to be mistaken.  The only thing shame lies in after the truth has come is to persist in one’s mistake.

Islam is the fastest growing religion in America, rather in the world.  In the past 50 years, Muslims have increased by 233%.  And across the earth, from every nation, Muslims number over 1 billion.

The key to Islam is the statement laa ilaaha illa Allah Muhammad Rasul-Allah – there is no (true) deity except God (Allah), and Muhammad is the Messenger of God.

This statement takes only a few seconds to pronounce, but it is the transformation point of the lives of billions of Muslims around the world.  Only the Creator deserves to be worshipped.

Let’s take an example from the lives of such people whose lives changed with this call to worship only one God.  Bilal - may God be pleased with him - was an Abyssinian slave for the aristocracy of Makkah in the year 623.  When Muhammad the Messenger of God, may God praise him, came with this message of ‘No (true) deity except God (Allah)’, Bilal - may God be pleased with him - denounced the 360 statues and idols that the tribes of Makkah were worshipping and believed in only God.

His enraged slave master Umayyah would take Bilal out in the sizzling noon heat because of his beliefs, and burn away Bilal’s back on the sand.  To intensify the pain, Umayyah would bring a boulder and place it on his stomach to press him down on the grilling sand, burning the skin away.

Bilal was freed by one of Muhammad’s closest friends and followers, Abu Bakr, and Bilal became the first mu’adhdhin (the one who calls others to prayer) of Islam.

Another example is that of the Muslim woman Sumayyah - may God be pleased with her.  She was also a slave and because they had accepted that no created thing deserved worship, only the Creator, she, her husband, and her son were subjected to physical beatings.

Although it was permissible for the Muslims to lie to save themselves from the torture, you’ll see example after example of Muslims who would rather die than surrender their right to believe that only God deserves to be worshipped.

Amongst the tyrants of Makkah there was a man by the name of Umar ibn Al-Khattab.  He was so vicious with the Muslims that he would volunteer to torture Muslim slaves.  One day, he just had enough and unsheathed his sword and set on his way to the home of Muhammad to slit his throat once and for all.  On the way a Muslim who had been hiding his Islam, Nu’aym ibn Abdullah, inquired about Umar’s haste.  "I’m off to Muhammad, that one who cut up our tribe, belittled our gods, and mocked our religion, to kill him!"

Nu’aym became afraid for the Messenger of God so he quickly thought and said, "Why don’t you start with your family first!  Your sister and her husband have accepted Islam!"

Umar became enraged and changed direction to his sister’s home.  At that time, a Muslim teacher, Khabbab ibn Al-Arat, was at their home teaching them the word of God, the Qur’an, and for a few moments Umar stood there listening.  Then he shouted for them to open the door.  Khabbab hid in an adjacent room and Umar’s sister Fatimah hid the scroll that had the Qur’an written on it.

Umar entered and walked right up to his brother-in-law.  "I heard you both have accepted Muhammad, and are following him." Then Umar pounded his brother-in-law in the face.  Fatimah, his sister, stood to protect her husband, and when she came in the way, Umar slapped the face of his sister with all his might.

She fell to the ground, her cheek split and the blood spilt all over her clothes.  She looked up at her brother and said from behind her tears, "Yes Umar we are Muslim and yes, we have believed in God and His Messenger.  Maybe you don’t have all the truth like you think you do?"

Umar was ashamed at the sight of his sister’s blood and desisted.  He asked, "What was that sound I heard, that recitation?"

His sister replied, "I fear for that scroll to fall in your hands." But Umar swore by the idols that he would do no harm.  She handed him the scroll after he had cleansed himself and he recited:

Taha.  We did not send down to you the Qur’an that you be distressed.  But only as a reminder for those who fear (God).  A revelation from He who created the earth and the highest heavens. (God) the Merciful (who is) above the Throne established.  To him belongs what is in the heavens and what is on the earth and what is between them and what is under the soil.  And if you speak aloud - then indeed, He knows the secret and what is (even) more hidden.  Allah - there in no god except Him, to Him belong the best names (Quran  20:1-8)

The Prophet shouted Allahu Akbar (God is Great), and everyone that heard it knew that Umar had become Muslim!