How Do We Know God is One? A Philosophical and TheologicalPerspective (part 2 of 3)

Description: The existence of God and His Oneness is known through reason and revelation.  Part 2 discusses three more rational arguments for the singularity and uniqueness of God. 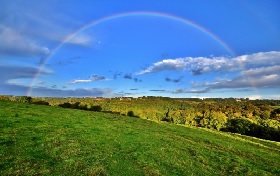 Logic necessitates that if there were more than one God who created the universe it would be in chaos and there would not be the level of order we find in the cosmos.  However you may point out that your car was made by more than one creator, one person fitted the wheels, and someone else installed the engine and another person the computer system.  So from this example there can be more than one creator with the created thing still able to exhibit order and stability.

In order to respond to this contention what has to be understood is that the best explanation for the origins of the universe is the concept of God and not ‘designer’ or ‘creator’.  There may be a possibility of multiple designers or creators, as highlighted by the car example, but there cannot be more than one God.  This is because God by definition is the being that has an unlimited imposing will, if there were two or more Gods that would mean that they would have a competition of wills and that would result in chaos and disorder.  However you may argue that they can agree to have the same will or each have their own domain, but that would mean that their wills are now limited and passive, which would mean they are not Gods anymore by definition!

This is explained well by Ibn Abi Al-Izz in his commentary of ‘Aqeedah at-Tahawiyyah’:

“The most common argument they advance is known as the argument of exclusion.  This argument runs like this.  If there were two creators and they disagreed about something, such as one wanted to move X, whereas the other did not want it to move, or one wanted to make Y a living being, whereas the other wanted to make it lifeless, then, logically speaking, there are only three possibilities.  First, the wills of the two are both carried out; second, only the will of one of them is carried out; third, the will of neither of them is carried.  The first case is not possible because it requires the existence of contraries.  The third possibility is also ruled out because it would imply that a body is neither moving nor not moving and this is impossible.  This would also imply that both of them are incapable or carrying out their wills, which would disqualify them from being God.  Finally, if the will of one is realised and not that of the other, he alone will deserve to be God and the one whose will is not realised cannot be considered God.”

What makes us appreciate difference and duality?  How do we differentiate between two people walking in the street?  The answer lies in what is called conceptual differentiation.  These concepts include space, distance, form, and physical features.  Take the following diagram into consideration,

The reason you can perceive two objects above is due to differences in colour, size, and shape, including their placement, in other words there is a distance between them.  In absence of these concepts could you perceive the two objects or any objects at all?  You could not, because these concepts are required to perceive any number of entities.  Now since the cause of the universe is outside the universe (if the cause was part of the universe it would mean that the universe created itself, this is absurd as it would necessitate the universe to exist and not exist at the same time!), you can safely assume that there are no conceptual differentiators such as distance, shape, colour and size; because these concepts only make sense within the universe.  Therefore if there are no knowable conceptual differentiators we cannot claim a multiplicity of causes, as I have explained above the impossibility of perceiving plurality or multiplicity in absence of these concepts.

Since you have no concepts to acknowledge a plurality of causes does this mean that even a single cause can’t exist?  No it doesn’t, because if there were no cause for the universe then that would mean the universe, in the words of Bertrand Russell, “Is just there and that’s all”.  In other words it would mean the universe is infinite, however this cannot be the case, as mentioned above the universe began to exist.  Therefore a single independent cause is rationally necessary to explain the fact that the universe began to exist and that a plurality of causes cannot be perceived due to the absence of conceptual differentiators.

How does this relate to the oneness of God?  Well if there were more than one cause for the universe that would mean they are not unique anymore.  However you may still argue that there can be two immaterial causes, and I would reply: what does that mean?  It would seem that you are violating Occam’s Razor and I would refer you to the first argument.