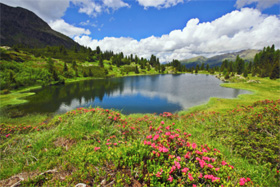 Ali Jamily was the fourth ‘western’ Muslim colleague, just out from the United States.  He had driven up from Jeddah because his first action on arriving in Saudi Arabia was to pay a visit to God’s house and walk around it (the lesser pilgrimage called ‘Umrah’).  This was one of the characteristics of Ali that I would get to know well: his obsession with visiting the House of God as often as he could.  He was wearing shades, and looked ‘cool’.  A second thing I would learn for him was his admiration of American social and legal norms, which he compared favourably to his experience of these norms in Saudi Arabia.  Yet under that ‘western’ exterior was the heart of one who loved God passionately.  Soon after he met me, he asked me if I knew about Islam, and I told him I had been reading his Holy Book.  Of course his next step was to ask me if I was going to embrace Islam, and I told him about my three conditions.

“Are you mad?” he said.  “You can’t make conditions with God.” He used the name for God I had begun to become familiar with in the Quran.  “Prostrate right now and beg His forgiveness! If you know this is the Truth, make your declaration of faith now.”

“Why shouldn’t I make conditions?” I asked.  “I want my family to be Muslim, too.  Is that too much to ask?”

“Guidance is for whomsoever God wills.  Are you refusing his guidance because of family concerns? Even the Prophet, peace be upon him, could not guide all his family, and his uncle died a disbeliever despite him being at his death-bead begging him to bear witness that there is no God but Allah, and Muhammad was His messenger,” he informed me.

“But I want to talk it over with my family first!” I argued, knowing that they should know my frame of mind before I took such a gigantic step as to formally embrace another religion seriously.

“What if you die before you get the chance to submit?” he asked me.  “If you die having known the religion and refused it, your destination will definitely be the Fire!  Have you any idea how lucky you are? Not everyone is touched like you have been.  You cannot refuse the chance He is giving you,” he argued persuasively.

At the time, I was taken aback by his attitude.  On reflection, however, I knew he was right.  I would be a fool if I let the chance slip.

My Avowal[1] of Islam

My next step was to go back to the Islamic Propagation Office and ask them how to formally embrace Islam.  When I stepped in the office for the second time, there was a look of surprised bafflement.  I don’t suppose they had many white Europeans invading their office, so they were trying to make out why I had come.

His English was good, I could tell.  However, I was just as surprised they didn’t understand why I had come to their office as they were that I had.  When I told him the reason, he told me that I had to receive full disclosure of what the religion of Islam was and the conditions of avowal.

It sounded a bit ominous.  I had expected to be welcomed, and sworn in straight away, but they insisted I needed some coaching.

There were two other people interested in being Muslims in the office before me, both from the Philippines.  David was a born again Christian who had become convinced of Islam during his Arabic language classes which the centre ran.  Coincidentally, he was the electrician who serviced the apartment/hotel that I was staying at.  John, however, had been persuaded to become a Muslim because his wife was Muslim.  He had been dragged to the office by David, who was his friend.

Arrangements were made for all three of us to make the double declaration together in the presence of two Muslim witnesses.  After that, we would be officially Muslim.  They arranged for a religious propagator to explain that very weekend coming up, after the noon prayer on Thursday.

Since David and I lived in the same apartment/hotel, John came by us, and we went to the centre together.  They showed us into the main rest area, which now had low floor cushions set around the walls with armrests to lean on for the occasion. Shaykh Ehab, or Abu Abdurrahman, as I now knew him, a man who I had given me the Quran in the first place, and Shaykh Farooq, who I had met when I came to the office to ask how to become a Muslim, were both there, waiting for us.  Then Shaykh Ibrahim, the manager of Ha’il Propagation Centre, brought in two men I did not know.  Apparently, they were volunteers.  Shaykh Sa’ud worked for the Saudi Electric Company, and Shaykh AbdulAziz for the Saudi Telecom Company.  It was Shaykh Sa’ud who did the disclosure.

He explained carefully that Islam was a monotheist religion, and taking the step of formally embracing Islam was a big step.  Once I had done so, there was no turning back, and if I did turn back, I would be subject to the death penalty for apostasy.

I said I knew the seriousness of the step.

Then he told me the six points concerning the creed.  “First, you must know and believe in your heart and in your prayer that Allah is your God, and there is no God but Him.”

“This is the basic reason I am here,” I thought.

He held up his hand.  “This means that you should not look to any object or image as a focus for your worship of God, for they are idols.  Also your worship should be direct to Him, not through any human being or spirit: prophet, priest, angel or elemental.  Do you understand what I mean?”

We each agreed that we did.

Then he went on.  “You must believe also in His angels, who are the messengers and errand doers of God.  They carry His word to the Prophets and do whatever He commands them on the earth and in the heaven.”

I nodded along with David and john.  It was the angels that destroyed Sodom and Gomorra on God’s command, and the angels who communicated with Mary about Jesus.

“And you must believe in God’s message, which you can find in the Quran, and in that which was sent to different Prophets in the Torah, the Psalms and the Gospel, before it.  We believe all of these Books were revealed to the Prophets by God.”

“Do you believe that these are all revealed by God through His angels to His Prophets?”

“Muslims have to believe in all the Prophets, naturally, and they are the ones who have given us the Message of God from the time of Adam.  Muhammad is the last of the Prophets because the Quran is the final message to mankind, and it tells us he is the end of the Prophets.  And you must believe that Jesus, Peace be upon him, is not God or the son of God.  He is a man, like us, created by the command of God in the womb of Mary, and a Messenger of God, just like Muhammad, may the mercy and blessings of God be upon him.  What do you say.”

“Jesus was a Prophet, like Muhammad,” said David.  I nodded.  ‘Of course,’ I was thinking.

“You must also believe that we will be resurrected and judged on the Final Day, and that in the Hereafter there is one of two destinies awaiting us: the Garden or the Fire.  This is the basis of our free will.  We choose where we go by our deeds in this mundane world.”

This is an integral part of Christian belief, too, so there was no trouble to assimilate it.  We agreed we understood.