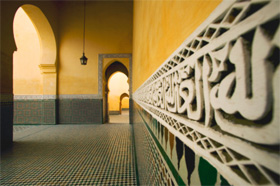 Not really following his train of thought, I accepted.  It crossed my mind that it was better than nothing.  He seemed to know what was going on in my head.  So, being the good psychologist he was, he started to hand it to me, and then withdrew it as I reached out to take it.

“There are three – no, four – conditions I want you to agree to before I give it to you,” he said.

“What conditions?” I asked, nervously.

“First, please don’t put it down on the floor or even on a chair.  You might accidentally step or sit on it, which is disrespectful to the holy book.” Well I could understand that condition.

“Secondly, I know it is the habit of some people to read while they are doing their business sitting on the toilet.” He was right.  I sometimes did it myself.

“Don’t do it with the Quran.  The place where you eject your waste is not the place to read it.  You shouldn’t even take it into the toilet with you.” Well, I could see what he was getting at, though I thought it a bit picky.  But I was willing to follow that condition too; anything to get hold of it, I thought.

“Thirdly, whenever you stop reading it, place it in a shelf, rather than leave it out.  It demonstrates more care.” No problem, I thought.  It shows that the Muslims cared for and respected the Quran a great deal.

“Fourthly, try not to put the Quran open and face down in order to keep your place.” That was very picky, I thought.

“Why?” I asked.  The question was getting to be repetitive.

“The word of Allah should not be facing down; it should be facing up.  If you need to keep your place, there is a place keeping ribbon attached you can use.” Well, of course! I thought.  That must be the reason the Bible has one, too!

“I accept those conditions,” I said, aloud.

He asked me to come and tell him how I got on, which I took lightly at the time, and I hurried off with my prize.  I couldn’t wait to get home and really get my head stuck into it that very day, especially since the next day was going to be Wednesday, my last free working day before the Saudi weekend, which was Thursday and Friday.

During the next week, I went through the Quran.  I started at the beginning, and read steadily through the second chapter.  Somehow, I had expected the book to be an account of the Muslim prophet’s life, something like the Gospels or the books of Moses in the Bible.  But that is not what I was reading.

Right from the start, it captivated me by apparently speaking directly to me.  There was no, ‘God said “such and such”,’ or ‘The prophet said “such and such”,’ as if it were reported by others concerning what a prophet had said about God or what a prophet had reported of God’s very words.  Indeed, I rather felt like I was receiving revelation direct from God Himself.  He was talking to me direct, and His words impinged directly upon my heart.

Soon I found myself crying, as I recognized myself, and members of my family, in the descriptions of the people of the book and their (mistaken) beliefs and obdurate stances.  Even some of the attitudes and beliefs of the disbelievers, hypocrites and polytheists echoed some of my attitudes and the attitudes of people I knew in the West.  My heart ached with concern over the possible destiny of my relatives, and quaked with fear over my, by now undoubted, destiny if I remained on the way I had been treading.

After reading the first big chapters, Al-Baqarah[2], Ali-'Imran[3], An-Nisa[4], Al-Ma'idah[5] and Al-An'am[6], I skipped through the book, looking for shorter chapters.  But even the shorter chapters of around 60 verses echoed the big five.  However, when I arrived at the final part, the 30th Ju’z, the chapters were suddenly no more than two or three pages, some only a page and a half.  And the topics were now more restricted.

Then the chapters fitted one page, or less than a page, until there were more than one chapter on each page.  At that point, one of those tiny chapters suddenly illuminated.

He begets not, nor was He begotten.

And there is none comparable unto Him.’

This was the heart of the Quran; what I understood as its True message[7].  It sounded so right to me.  It was just the way I felt about God in my own, made up, religion despite what the churches of my religion taught about the divinity of Jesus and the concept of Trinity.

Could it be that Muslims really believe in a single Creator, Unique, the Foundation and Mover of the Universe? Is it really true that this God repudiates any possibility of procreation, either from Hisself or being procreated from another?  Does this religion truly confirm what I think is true anyway? And, if it does, doesn’t that mean I have a duty I have neglected all this time?

These thoughts and questions stumbled through my mind.  I had to check against the only Muslims I had more than a passing acquaintance with; two colleagues at the University College.

I stopped them on the stairs leading up to the main gate of the main building.  They had been aware I was reading the Quran, and they readily stopped, happy to be able to answer a question I might have.  I apologised for taking their time and got right down to this amazing discovery I had made.

“I’ve been reading your Book,” I said, “and I’ve come across a verse which seems to sum it all up.”

“Which verse is that?” It was Isma’il Rostron, the white convert who asked.

He begets not, nor was He begotten.

And there is none comparable unto Him.’

It’s what the whole book is driving at!”

“Funny you should say that,” said Jamal.  He was British from Pakistani origins, and a born Muslim.

“There is a story about one of the Prophet’s companions[8], handed down to us through the traditions of the Prophet, may the mercy and blessings of God be upon him.”

“What story?” I encouraged.

“Really?” I asked, feeling a little dazed by this confirmation.

“Yes,” said Jamal.  “And there is another which tells you exactly how much of the message this chapter of the Quran is.”[9]

I was on tenterhooks.

“A man heard another man reciting ‘Say, He is Allah the One’ over and over again through the early morning hours of the night.  So, when morning came, the man went to the Prophet, and mentioned it to him, and it was as though he was belittling it.  The Prophet said, ‘By He Whose Hand is my very soul, verily the chapter and its message is equivalent to a third of the Quran’.”

“So, you see, you are right.  It is what most of the Quran is driving at,” he continued.

I was convinced.  The Muslims really believed in this principle, no ifs or buts, and no shading into trinity or mediators allowed.  This was The God I could really relate to.

“What about the other thirds?” I asked.

“One third consists of the stories of the Prophets and the lessons we learn by their example.”

“What the prophets did and said, how they proclaimed the message to their people and how they interacted with their families and communities.”

“That’s the ordainments of Allah concerning how we live individually and as a community,” he said.  “Things like the legal statutes concerning marriage, divorce, parenting and child rearing; purification, prayer, fasting, and pilgrimage; the lawful and the prohibited in alimentation and social interaction; law and punishment.”

I decided I had to go away and think about the implications.